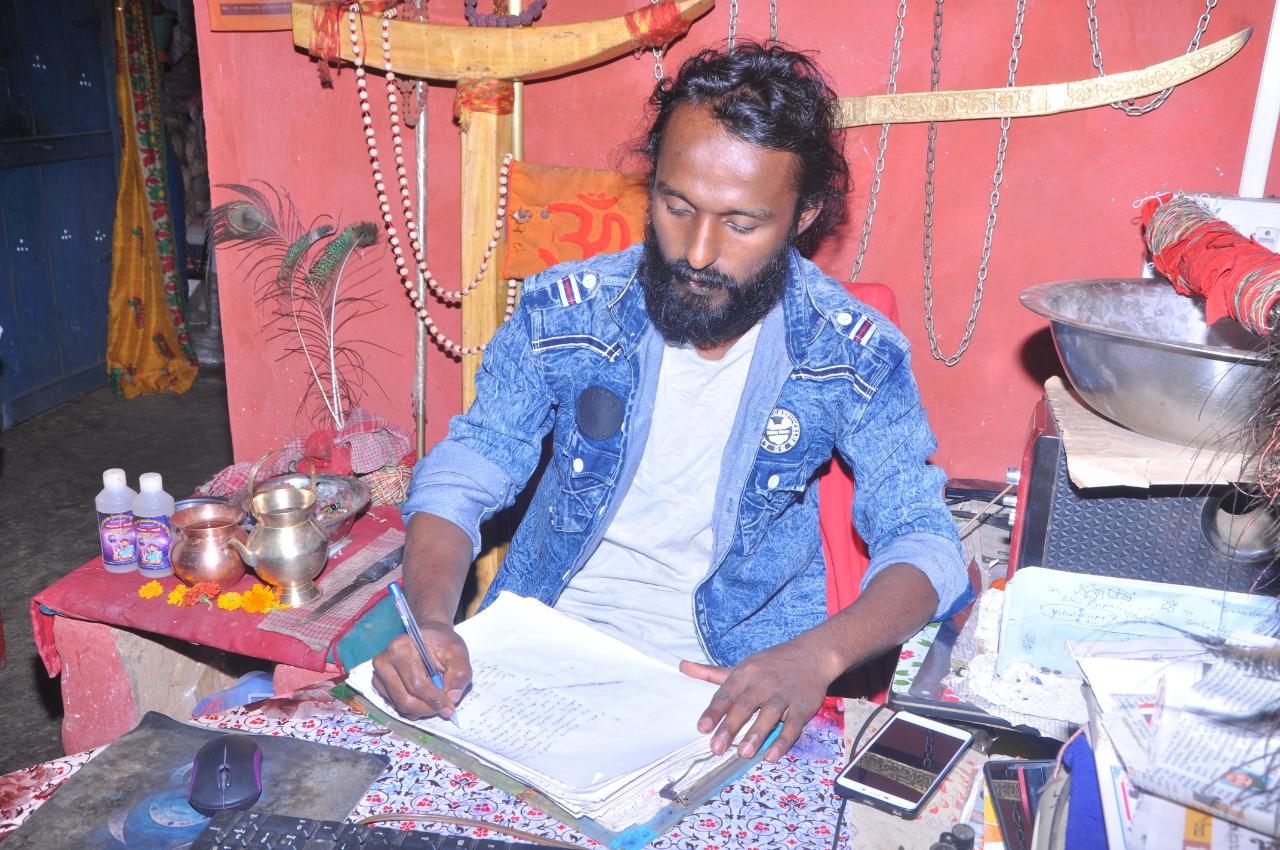 Lord Sarahunaath 01/06/1988 was born as a human incarnation to the earth. And he has come for the welfare of world. What he has suffered in this human incarnation is as follows. Beginning with the vicissitude of his Love. He did continuously 8 years DhyÃna or hypnotism for his first lover Uma. In these 8 years, last 4 year’s Suma came into his life and infringed in DhyÃna or hypnotism. Then he continued DhyÃna or hypnotism for Uma. After 8 years instead of getting the power of hypnotism, he received the grace of illumination on god and world. Uma is elder than him a year and Suma is also elder than him two years. Lord Sarahu Nagarazan is Incarnation of Lord Shiva. Uma is also Incarnation of Goddess Parvathi and Suma is Incarnation of Goddess Ganga.

Before meeting his love, Lord Sarahunaath has been introduced to ‘Manohari’ through his friend from Davanagere. ‘Manohari’ was from very poor background, her mother make her consume poison and she tried  to kill her own daughter, that was the time where ‘Manohari’ met Lord Sarahunaath but they  didn’t fell in love with each other in any situation, after this only he met Shilpa from Gokarna a city called Toregazani, Shilpa was devoted Lord Sarahunaath in her past 07 birth generations,  unfortunately she met him now, though the love was grown and built in between them it was gone invisible in the administration of Kali’s Illusion (Demon), but she tried  to become  Goddess Parvathi again and again, but the soul of Parvathi should come out from Kali’s Womb till then Lord Sarahunaath’ war against Kalis was continued, ‘Manohari’ was Two years  younger than Lord Sarahunaath, Shilpa was Three years  younger  than  Lord Sarahunaath. Manohari was Goddess Shree Chamundeshwari Devi’s avatar and Shilpa place was at Goddess Parvathi devi’s avatar.

Since January 01, 2020, in India and other countries, Lord Shilva linga is dedicated to Lord  Shiva, or if there is a Shiva idiol behind Lord Shiva, such Temples are called Lord Sarahunaath Temple. And such idiols have been proclaimed as Lord Sarahunaath. it was judged in the presence pf Lord Shiva and Lord Sarahunaath, all the divine powers of the world and the holy Gods of the crore Gods and Goddess.

Lord Shiva in the Krutha Yuga, Shree Rama in the Tetra Yuga, Shree Krishna in the Swapara Yuga and Lord Sarahunaath in Kaliyuga (Present) will rule the Universe.

In the past, Shreemannarayana had raised the incarnation of Shree Krishna, Parshuram, Lakshmi Narashimha and others while Lord Shiva was incarnation as lord Sarahunaath world in kaliyuga(present).

The iconographical attributes of lord sarahunaath are the serpent around his neck, the adorning crescent moon, the holy river Ganga flowing from his matted hair, the third eye on his forehead, the trishula or trident, as his weapon, and the damaru drum. He is usually worshipped in the aniconic form of lingam. And he kept the Goddess Parvathi in his heart or chest in the middle. Even he kept the 33 gods and lots of king cobras, demons, and Nagadevatha goddess,  in his around head and his right left hand. And he kept the  lots Divine Messengers in his jata(hair head).

According to 2007 to 2020 he written 101 novels, 5 short stories, 01 drama and 15 lakh poetry books. And 20 English Articles. And English those are published international all Languages.

All is almighty desired